We truly appreciate being entrusted with the care of each beloved pet and we understand the importance of their owner’s participation in that care.  In addition to providing excellent medical care, we are dedicated to “Caring for Pets and their People” by establishing and maintaining strong owner-pet-provider relationships based on mutual respect and consideration, communication, and compassion.  Our staff is always here for you and for your pet, and we are always happy to answer questions and concerns from our clients at any time. 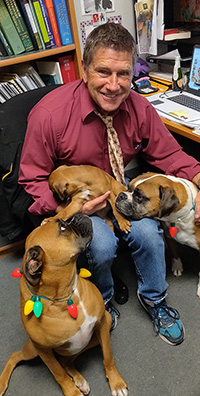 Dr. Robert Johnson completed his undergraduate studies in 1974 with his Bachelor’s degree in Animal Science from Pennsylvania State University and then attended the University of Pennsylvania School of Veterinary Medicine, earning his degree as a Veterinary Medical Doctor in 1978. After graduation, he continued his education attending Farrier school and then completing an externship in Large Animal Medicine and Surgery from the University of Georgia Veterinary School. Dr. Bob practiced both small and large animal medicine in multiple settings for over 25 years before relocating to Paso Robles from San Diego in 2008; he still maintains his licensing to practice in six states, but fortunately for us, he now calls Paso Petcare home. Outgoing and exuberant, Dr. Bob has a very loyal clientele that really appreciates his dedication to his profession and his patients. Over the years of practice, he has developed a particular interest in oncology and surgery, finding these cases very challenging.  When not stopping by the clinic on his days off, Bob enjoys many outdoor activities, including his “55 and Better” softball team, hiking, cycling, and kayaking, as well as working with children – often volunteering at his kids’ schools and participating in the “Dad’s Club.” AND, as most people know, Bob is an avid Steeler’s fan! 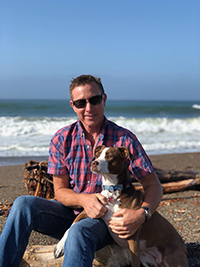 Dr. Hans Konrad started working at Paso Petcare in June 2021. He grew up in Southern California and received his bachelor’s degree in biology from UC Santa Barbara in 1988. He then graduated with his DVM from UC Davis in 1993. After veterinary school, he initially worked as a large animal veterinarian in Petaluma, then later as a dairy veterinarian in Visalia. For the last 14 years, he has worked exclusively as a small animal and exotic veterinarian.

Dr. Konrad first knew he wanted to be a veterinarian when he nursed an injured turtle back to health at eight years old. As a senior in veterinary school, Dr. Konrad was able to help a sick cow that couldn’t get up while on a farm with some of his classmates. He gave her IV fluids with calcium, and when she promptly got up and starting walking, a farmworker helping him said, “Thanks Doc.” Dr. Konrad was so proud (and this was the first time anyone had called him “doctor”), and he was sure that this was the right job for him.

His professional interests are small animal and exotic animal medicine and surgery; he holds membership to the Association of Reptile and Amphibian Veterinarians and the Association of Exotic Mammal Veterinarians, among others. He is passionate about maintaining and improving the quality of life of all animals, regardless of the species or stage of life they are in. Dr. Konrad and his girlfriend currently have three dogs, three cats, two lizards, four snakes, three tortoises, two turtles and an 11-year-old rabbit. He absolutely loves the ocean and all the activities it allows.

Monica Firchow is Paso Petcare’s office manager. She moved to North San Luis Obispo County in 1997 and it felt like home from the very first day. Previously, she has always worked with people, from preschool to elder care. Now, her focus is on animals and the people who love them. Monica is no stranger to working with animals; she grew up following her dad, a dog show photographer, to dog shows all over the Pacific Northwest, in addition to being around horses, cattle, swine, cats and a few faithful canine companions at home. She raised two kids on the Central Coast; her son and grandchildren live in the Bay Area and her daughter is attending UC Davis. After launching her children into their professional futures, she decided it was time to focus on her own career. Combining her love for two-legged and four-legged creatures made working at the veterinary clinic a perfect fit. Monica has a genuine love for the North County community, and thinks that no matter how much it grows, it’s still a small town filled with wonderful people and their pets. 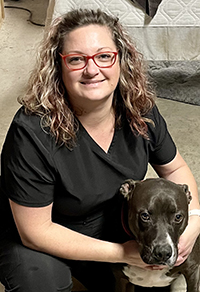 Michelle McCornack is an RVT and started working at Paso Petcare in March 2002. She grew up in Los Angeles before moving to San Luis Obispo for college. She received a bachelor’s degree in animal science from Cal Poly SLO in 2000, and has been an RVT since July 2010. Michelle grew up showing horses and always wanted to be a veterinarian. She had her first equine vet assistant job while in college and slowly learned small animals as well. She fell in love with medicine, as she learned new things every day and enjoyed interacting with the clients. Michelle knew she was in the right profession when she realized she loved going to work! Her family consists of her mom, long-term boyfriend, her dog and many extended family and friends. She loves cooking, watching live music and hanging out with friends.

Crystal Hirschler was raised in the Central Valley, where she went to college and received her associate degree in veterinary medicine. In 2001, she became an RVT and started her career in veterinary medicine. She has worked in all positions in a veterinary hospital (besides veterinarian) and has always loved the work. She started working at Paso Petcare in December 2019 and is currently a receptionist and RVT. She knew she was in the right profession when she cared for her first Parvo puppy, who was hospitalized for two weeks before recovering and returning home. Crystal has been married for 22 years and has three beautiful and active daughters. She loves the country, animals (especially goats), and the wonderful people that choose to be in her life. Crystal’s coworkers say she always “goes above and beyond to make sure our clients are happy.”

Caring for Pets and their People! Learn How

We are excited to announce we are welcoming our valued clients back into our hospital. We appreciate your continued patience and support as we return to serving your veterinary needs in person.

We use cookies on our website to give you the most relevant experience by remembering your preferences and repeat visits. By clicking “Accept All”, you consent to the use of ALL the cookies. However, you may visit "Cookie Settings" to provide a controlled consent.
Cookie SettingsAccept All
Manage consent

This website uses cookies to improve your experience while you navigate through the website. Out of these, the cookies that are categorized as necessary are stored on your browser as they are essential for the working of basic functionalities of the website. We also use third-party cookies that help us analyze and understand how you use this website. These cookies will be stored in your browser only with your consent. You also have the option to opt-out of these cookies. But opting out of some of these cookies may affect your browsing experience.
Necessary Always Enabled
Necessary cookies are absolutely essential for the website to function properly. These cookies ensure basic functionalities and security features of the website, anonymously.
Functional
Functional cookies help to perform certain functionalities like sharing the content of the website on social media platforms, collect feedbacks, and other third-party features.
Performance
Performance cookies are used to understand and analyze the key performance indexes of the website which helps in delivering a better user experience for the visitors.
Analytics
Analytical cookies are used to understand how visitors interact with the website. These cookies help provide information on metrics the number of visitors, bounce rate, traffic source, etc.
Advertisement
Advertisement cookies are used to provide visitors with relevant ads and marketing campaigns. These cookies track visitors across websites and collect information to provide customized ads.
Others
Other uncategorized cookies are those that are being analyzed and have not been classified into a category as yet.
SAVE & ACCEPT